Who invented the mobile? Learn the history of mobile discovery

In today's article we will learn about who invented mobile (Who Invented Mobile Phone in English). In addition, through the article you will be able to know a lot about the history of mobile. 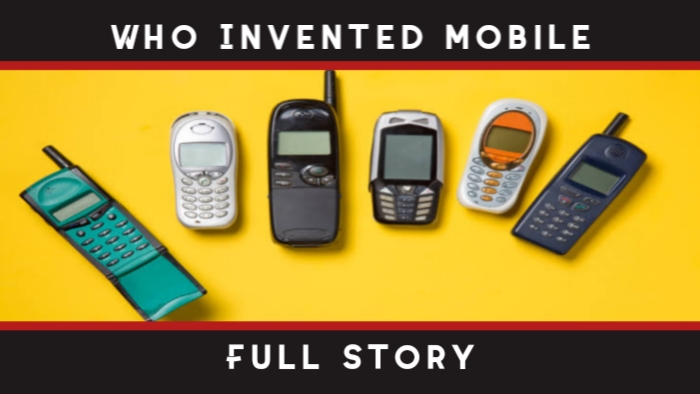 It is important for everyone to know who invented the mobile phone . Because, today, mobile is one of the most important part of our life.

In modern times we can imagine ourselves without mobile phones but it is not possible.

Of all the things that have been discovered so far, I am not mistaken in saying that the invention of mobile is the most important and useful invention.

Today, it has become possible to communicate with people from anywhere in the world through mobile.

A mobile phone comes in handy in everything from simple living to business, education, communication, development, etc.

Also, a mobile phone has made our way of life much easier and simpler.

Because, using modern technology, nowadays mobiles are not being used only for voice calling.

From morning till we go to bed we use our mobile phone for some work.

Many people want to know more about this mobile that stays with us for about 24 hours.

So, through this article we are going to tell you about the various information related to who invented mobile and the history of mobile.

Martin was working as a researcher at Motorola at the time.

Now do you know who Martin made the first call with his mobile phone?

“Dr. There was a man named Joel S. Engel who was Martin's rival, and he was called for the first time by Martin on his mobile.

You will be happy to know that this mobile phone made by Martin Cooper was named " Motorola DynaTAC ".

Now if you want to know how tall and heavy this mobile was, then I will tell you.

This Motorola mobile was 9 inches long and if we talk about the weight of the mobile, it weighed 1.1 kilograms (kg).

Since it was the first mobile phone in the world, the cost of this phone was much higher.

So, for a long time now, we have been working on finding out the flaws in the phone and how to reduce the production cost of the phone.

In addition to this, work has been done on how to make the cellular network more powerful.

After that, this mobile phone was made available in the market in 1983 so that the public can buy and use this phone.

And the name of that mobile was, " Motorola DynaTAC 8OOOX ".

Let's now know some information about the history of mobile phones.

1946: First call from a place called Chicago by car radiotelephone.

1956: Sweden introduces the first automated mobile phone system for personal vehicles. This device had to be installed separately in the car.

1969: The Nordic Mobile Telephone (NMT) Group is established. Its purpose was to develop a mobile phone system.

1992: The world's first SMS message is sent to the UK. Neil Papworth, a 22-year-old telecom developer, was asked to develop a messaging service for Vodafone. The text message was "Merry Christmas" and was sent to a man named Richard Jarvis who was a director of Vodafone.

Above we have learned about the history of mobile phone as time or year.

Let's know some other information related to the history of mobile below.

Some important history on mobile

AT&T gave some of their customers access to radio telephones.

These were services like walkie-talkie transceivers through which a very limited number of calls could be made. Also, because of the limited resources available, it was not possible for them to make any personal calls.

The phones were very heavy and very large in size, for which it was not possible to keep the phone in one's pocket.

The development of a cellular network was approved by the Federal Communications Commission (FCC) through AT&T, and Motorola's Martin Cooper took a foolish step in 1973.

Who invented the smartphone?

So, the world's first smartphone was developed by IBM.

The specialty of this mobile was that it was a touchscreen mobile, here was the advantage of email, various built-in apps were provided such as calculator, sketch pad etc.

How many types of mobiles are available in the shrine?

At present there are basically 3 different types of mobile phones available in the market.

Let's know some information about each of the different phones below.

These cell phones were one of the first mobile phones available.

There is nothing special about the advanced features and functions in these mobile phones. However, these types of phones can be used very easily.

This type of phone is primarily designed for voice calling and SMS messaging.

Since these types of phones do not have anything special to say extra features, so their prices are relatively low.

With the increasing demand and use of modern phones, the demand for these types of cell phones has come down a lot.

So, at present these cell phones are seen in the hands of very few people.

A feature phone offers a wide range of multimedia options, such as taking photos, recording videos, using the internet, playing music, etc., in addition to regular calls and SMS.

These mobile phones cost a bit more than normal cell phones, but they cost less than smartphones.

Now we all know about smartphones. A smartphone offers a variety of features and benefits. In other words, a smartphone is a mini computer where you can do different things just like a computer.

The latest and most advanced technology has been used in the smartphones.

These types of mobiles work through many powerful operating systems (OS).

Smartphones have touchscreen features and have almost every advanced and modern feature.

Due to these advanced features, the demand for smartphones is higher in the market than other mobiles.

So friends, through today's article we got the answer to the question  who invented mobile .

In addition, we have discussed a lot about the history of mobile in the article.

Also, if you have any questions or suggestions related to the article, please let us know in the comments below.