Who invented television? History of the invention of the television

Who invented television:  Well, think of the world today without any TV, radio, computer or smartphone? What? Are you thinking? 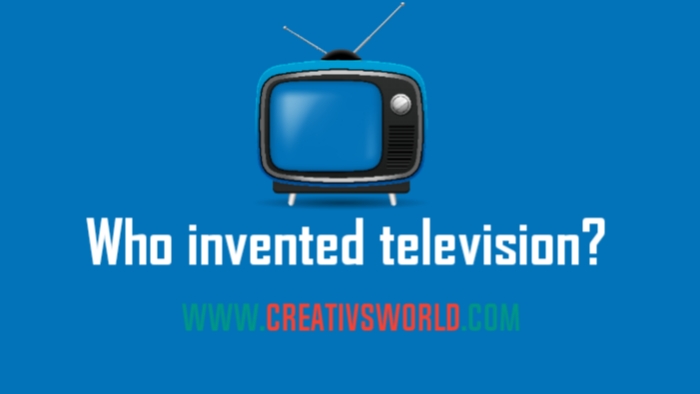 In fact, can modern society live without them?

Absolutely not, after working all day everyone wants to lighten the mood a little at the end of the day.

And what could be a bigger mood-maker than entertainment?

And, this is exactly why the groundbreaking television or TV was invented.

In today's article we will discuss who invented television (Who Invented Television in English), the history of discovery, time, how it works, all these things.

Basically, this television or TV is a kind of entertainment device; Which has been created for the purpose of entertaining people.

Generally speaking, a TV is a type of electronic system used to transmit transient images of a stationary or moving object together by means of a cable or by means of a device and through space (space).

After converting light and sound into electrical waves through this system, they are re-illuminated as visible light rays and audible sound on a screen.

The word television originally means the Greek prefix 'tele' or distance, and the Latin word vision or "seeing from afar ".

Who invented television? In what year was the discovery made

Scientists from different parts of the world were conducting research and research for the invention of TV more or less at the same time.

However, the first successful electronic television show was on September 6, 1928 in San Francisco.

This television system was developed by Philo Taylor Furnsworth.

He was only 21 years old then.

History of the invention of the television:

The TVs of the previous model of this electronic television worked more like a telescope than a TV.

However, the first mechanical TV was invented in the early 1920's.

The inventors of this type of television were the Scottish inventor John Logie Beard and the American inventor Charles Francis Jenkins .

He named his instrument the electric telescope .

Then, in 1906, Boris Rodgers of Russia and AA Campbell-Swinton of England combined cathode ray tubes with mechanical scanning systems to create a completely new television system.

A few years later, in 1928, Farnworth successfully launched his first electronic television in the world.

The first thing that was sent on this television was a straight line.

One potential investor asked, "When will we see a few dollars from this thing?" In this question, Farnworth made a historical point.

He sent a dollar sign on his television set.

However, with the outbreak of World War II at that time, Farnworth could not carry this groundbreaking discovery far.

Later, following his ideas, many people started building their own electronic televisions.

Although the inventors of mechanical televisions continued to experiment with improving their television sets between 1928 and 1931, they gradually became extinct thanks to modern electric televisions.

By 1934, almost all TVs had been converted to electronic systems.

Also, Dr. Kenjiro Takayanagi, known in Japan as the "Father of Television", was an engineer by profession.

Who is said to have made the world's first practical electronic television in 1926.

The TV is a device that has been the subject of much research around the world, and over time, the device has improved dramatically.

Throughout the 19th and 20th centuries, various improvements were made to television equipment and services.

Although electronic TVs first began to feature scenes on black and white screens, color TV came and went in the 1950's.

The journey of modern television:

The first exemplary change after mechanical and electronic TV was -

In 1928, with the introduction and demonstration of new technology by scientist John Logie Beard , TV began to come up with color screens, instead of black and white screens.

These types of TVs are capable of capturing different channels at different frequencies.

However, the popularity of this type of TV continued to grow until about 1990.

Today, modern smart TVs can connect to the web and the Internet with just one click.

Although earlier TVs were largely made using cathode ray tubes, the use of plasma, LED and LCD screens has led to the birth of a state-of-the-art smart television technology.

He sought to bring about this groundbreaking change, using electromechanical and cathode-ray tube technology to create 3D televisions.

However, this 3D television is only capable of working with 3D media files or 3D movies.

Let's take a look at the workings of television -

How does television work?

Simply put, the work of any TV begins with the recording of a video camera.

Then, those electrical signals are sent to a satellite.

And, finally, after the signals from that satellite enter your TV set, they are again converted into images and sounds and visible to your eyes.

A standard TV camera converts images into a kind of electrical signal, called a video signal .

On the other hand, the camera's microphone converts sounds into other electrical signals, called audio signals .

And, the combination of these two types of signals creates the TV signal.

Digital TV, or D-TV, is one of the most popular ways to manage modern TV signals.

These digital TV signals carry images and words as a kind of number code.

Basically, digital signals are capable of carrying much more information than standard signals.

Due to that, the picture and sound quality of today's TV is very advanced.

For example , high definition or HDTV, or digital TVs are a kind of high-quality audio-visual medium.

A TV signal can reach your TV set in a variety of ways.

Local TV stations can send signals through the air in the form of radio waves or broadcast with the help of antennas.

Or, a satellite or spacecraft orbiting the Earth may send a signal to a type of antenna called a satellite dish.

TV signals can also be transmitted from a DVD player, VCR, or DVR (digital video recorder) attached to your TV set.

VCRs, DVRs and many more DVD players can record any TV signal that comes on the TV and play it again later.

A good TV set converts a video signal into a ray of tiny particles called electrons.

These electrons illuminate the rays behind the screen through the TV's picture tube.

These rays "color" the pixels on the screen to create images on the TV screen.

On the other hand, when a TV set sends an audio signal to a loudspeaker, it reproduces the sound.

They do not use picture tubes or electron beams.

For this reason, these LCD and plasma TVs are much lighter and thinner than other standard televisions.

However, there are some small solid parts that are special.

The solid parts of the liquid crystal move due to the electric current.

And, in this type of display, when you try to capture a picture on the screen, in a certain way, the screens let the light go in or out.

The electric current transmitted through this plasma gives it light to form images.

Discovering television , our today's article on this subject ends here.

If you like our article on television, please let us know in the comments.

In addition, there will be requests to share the article on social media pages.